Kling Factories was operated as a family business between 1911 and 1962 in Chautauqua County, New York State, USA. In 1962, the family sold the firm to what is now known as Ethan Allen Inc. “Kling Colonial”  and Kling branded furniture was produced by Ethan Allen from 1962 into the 1990’s. The original Mayville, N.Y. factory was operated by Ethan Allen until it closed in 2003.

Kling Factories was founded in May 1911 when John A. Kling, an immigrant from Sweden, purchased the bankrupt Chautauqua Spring Bed & Lounge Company in Mayville, New York and renamed it the Chautauqua Cabinet Company. John Kling immigrated at age 17 to Jamestown, N.Y. in 1885 and worked in several furniture factories in the area as a cabinet maker, cabinet room foreman, and plant superintendent before getting the opportunity to own his own business.

By 1928, John Kling had purchased four additional factories in Chautauqua County, New York and the company was reorganized as the Kling Factories. These additions were The Frewsburg (NY) Furniture Company, The Herrick Manufacturing Company (Falconer, NY), The Brockton (NY) Furniture Company and the Crandall Panel Company (Brockton NY). Pictured below, an image from 1927 Kling literature. 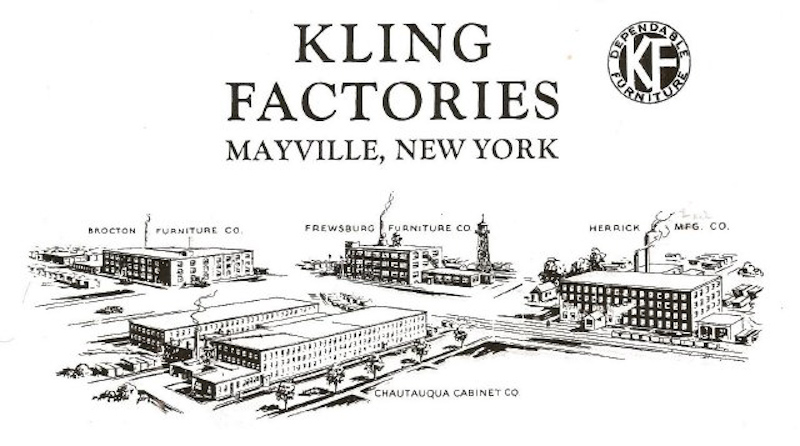 In just seventeen years, John Kling built up the organization to sales of approximately $3 million in 1928. His idea to have each of the company plants specialize in a particular furniture style would make Kling Factories one of the nation’s largest volume producers of bedroom furniture. The 1929 stock market crash and the ensuing great depression hit furniture manufacturers hard. In the depth of the depression in 1933, Kling Factories sales were reduced to $1.5 million due to price deflation and lower volume, but the company was marginally profitable.

In 1934 John A. Kling died, leaving the responsibility of managing the company to his sons Arvid (President) and Denold (Vice President). Arvid had considerable experience in the furniture business; he began working in the factory in 1911 at age 19 and rose to be national sales manager. Denold, the younger brother, had also been with the company since 1922.  Through sound business management, including the introduction of more affordable lines of furniture, the two brothers brought the company through the depression while many Jamestown, N.Y. area furniture companies went bankrupt. Kling Factories continued to introduce new lines of furniture and business was strong enough to justify an addition to the Mayville plant in 193x. During World War II, the company produced a utilitarian style of bedroom furniture for the U.S. government. 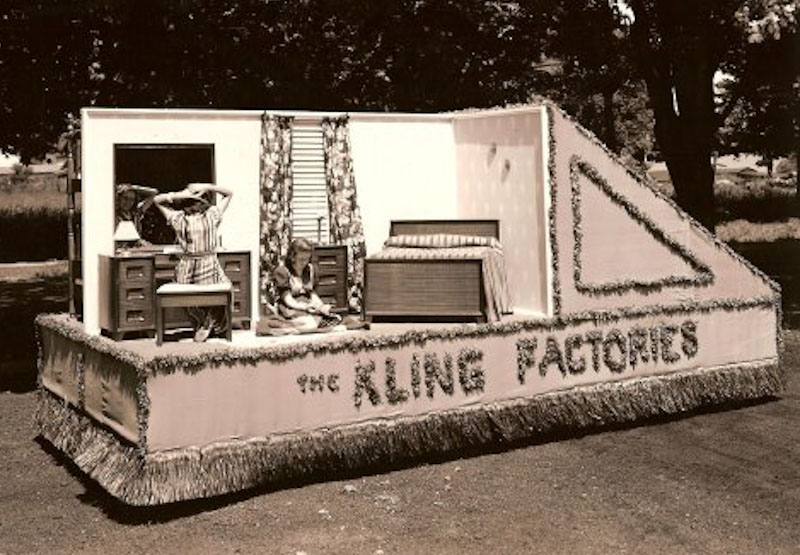 The period from 1947 to 1960 represents the peak of the Kling Factories in volume and quality reputation. Like many post war ventures the company took off nationally and was aided by advertising in magazines such as House Beautiful and Better Homes & Gardens. In 1955 Arvid Kling retired and his brother Denold took over as president. Denold’s four sons entered the family business and were assigned to responsible management positions. The company continued to expand the breadth of its lines into the early 1960’s.

In 1961, Denold Kling passed away. Kling Factories was sold in April 1962 to the Baumritter Corporation which later became Ethan Allen Furniture. For several years Ethan Allen featured “Kling Colonial” products but eventually phased out the use of the Kling name.

Kling Factories was a 51-year family business success story. It is also an example of how the hard work, dedication, and special skills of European immigrants contributed to the dynamic and prosperous nature of the U.S. economy in the 20th century.